Ball valves with supporting a pivot point, like on an old cannon of the KShTs type are designed for shutting off the pipe channel of drill pipes to prevent the occurrence of open gushers or in the process of their elimination during drilling of oil and gas wells.

You can order a KShTs trunnion ball valve in one of three modifications with different diameters with a flow-through opening and different load capacity. 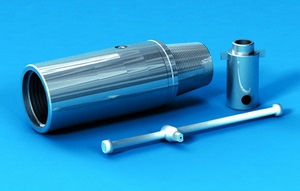